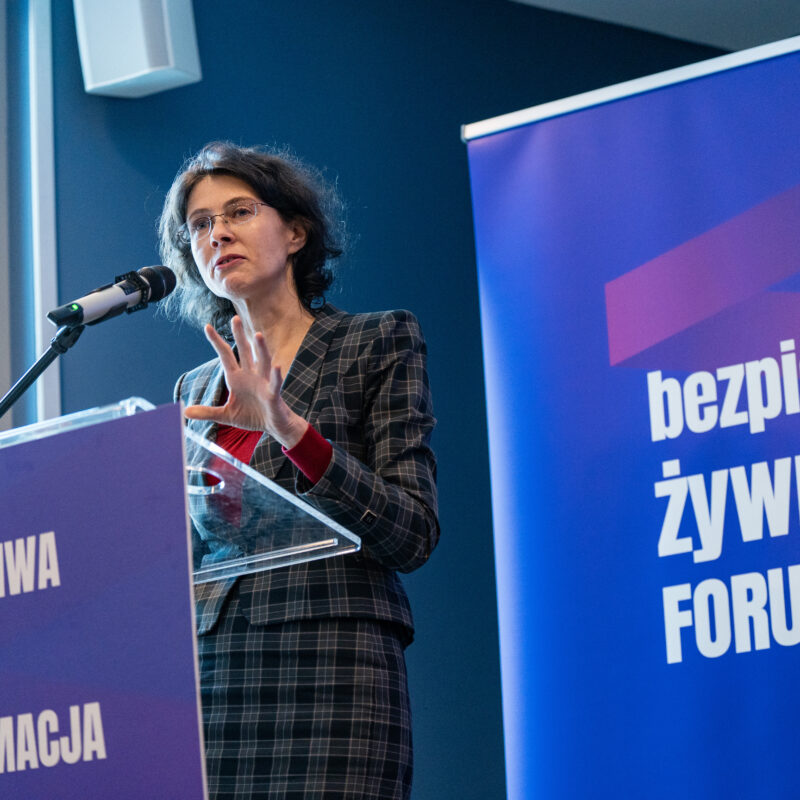 On November 19 this year, the #FutureFood4Climate coalition met at the I Food Safety Forum under the honorary patronage of Warsaw Mayor Rafal Trzaskowski, matronage/patronage of Krytyka Polityczna, Silesian Opinion, Ekowyborcy, Green News.

👉 Prof. Joanna Hańderek spoke in the opening remarks:
🌳”48 billion slaughtered animals, methane and carbon dioxide, the despair of a cow, the long-lasting trauma of a people working in a slaughterhouse – these are just some of the effects of the violence of meat corporations. In fact, in order to produce something euphemistically called „filet,” „cutlet,” „minced,” or diminutively and infantilely „chop,” „meat,” we kill the world, the animals and ourselves.
The VI great animal extinction is underway, the climate crisis is underway, the IPCC reports leave no doubt, we cannot increase the temperature of our globe by 1.5 C because this will lead to unpredictable consequences of climate change. However, we will not achieve any halting of global warming if we continue to persist with a diet that kills: the world, animals, people.
Science is a tool, an effective tool, if only we are willing to use it. It’s high time that, on the one hand, educators and educators start making us aware of the evils of „meat production” for the entire planet, and on the other hand, politicians and decion makers start working to change the law and give us new regulations on consumption. It’s high time that both at the level of our existence and at the level of institutions we start supporting clean practices and solutions, relieving our world, human animals as well as non-human animals from this huge climate and moral disaster.”